On Friday, downtown Cairo was transformed into a field of artistic creativity.

With young graffiti artists in the background painting on the barricades erected by Egypt’s ruling Supreme Council of Military Forces (SCAF), four people with giant, puppet-like floats of military figures on their shoulders caught many by surprise.

The SCAF characters marched behind a drummer, who tapped a solemn rhythm to the procession, first around the square and then entering another area where state security also attacked protesters: Mohamed Mahmoud Street.

A young man walked on tall stilts with a television-like set hanging from his neck. His statement was that the military procession came with their own media channels to cover the event: a hard-to-miss reference to Egyptian state television, which is perceived as extremely biased.

It is not the first time puppets show up in Tahrir Square. Throughout the first months of the revolution many protesters entertained the crowd with small puppets on strings; first representing Mubarak and then Field Marshal Mohamed Hussein Tantawi. From the puppets on strings to the large puppets, this is another theatrical element that helps protesters voice their demands.

This time, however, the procession of giant puppets made a greater impact on a large audience of Tahrir Square. In a very orderly fashion, the four double-than-life-size puppets marched proudly around the protesters in the square and then towards Mohamed Mahmoud Street.

In contrast to the smaller puppets on strings that engage the audience with witty conversation, the giants marching through Tahrir did not talk. They steadily made their way, bit by bit, through the crowd, to the rhythm of the drummer, without communicating with the people – as if the people did not matter.

“This whole initiative goes back to weeks prior to 25 January 2012, when we decided to create a giant puppet representing one of the SCAF members,” Omar El-Shamy, one of the puppet-makers tells Ahram Online.

The group fostered their contact with a puppet maker in Fayoum who taught them how to make the puppets and helped them materialise their project. “Today, we are eleven young people coming from a variety of educational backgrounds. We are mostly undergraduates of media and other departments from the American University in Cairo and from the Modern Sciences and Arts University, among other universities,” El-Shamy commented.

“All together we created the bodies, hands, heads, along with the mechanism to carry the puppet.” El-Shamy adds that they took all four puppets to the last arts festival in public squares called El Fan Midan on Saturday, 3 March.

Despite their silence, the puppets carried a strong political message.

“Happenings,” as performing art in an open space was impossible under the previous decades of tight regime rule. Furthermore, all performances involving puppets were limited by dramaturgy or space. Theatre walls presented specific texts, while improvisations were still reserved to a theatre box (like the one used for Al-Aragoz performances).

The move of giant puppets with political messages towards the street, with direct impact on the audience and a simple theatrical backbone is one of the important indications of changes that are taking place in the artistic field in Egypt.

It is through the happening that the audience is indirectly invited – or provoked – to join the artistic event. As such, the procession of four giants attracted the attention of many social strata and the numbers of people following the rhythmic march increased by the minute.

When the puppet entered Mohamed Mahmoud Street and sat down to allow their puppet masters to rest, passersby photographed themselves next to the puppets with their camera phones. 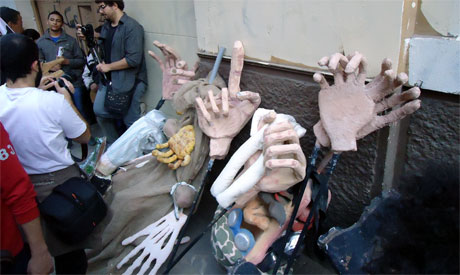