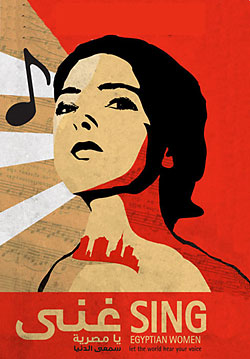 “Sing Egyptian Women” (Ghany Ya Masriya) is a women’s empowerment programme sponsored by the US Embassy in Cairo, ShareTheMic, and Nile Promotions. Presented in the form of a singing competition, the programme seeks to provide talented Egyptian women with the opportunity to represent their country on the world stage. It was launched in November 2011, when Egyptian women were invited to submit videos of their singing, that were then uploaded to a Facebook page created for the purpose by the US Embassy.

The competition is in three phases, with the winner offered a four-day trip to New York City to record at the Manhattan Centre Recording Studios. The panel of judges included Egyptian soprano Nevine Allouba, Nile FM radio station presenter Mohamed Safi, Director of Nile Promotions Yasmin Tayeby, and representatives from ShareTheMic, a newly established US innovation company which, according to its web site, “creates strategic partnerships with social causes and provides cultural outreach worldwide.”

Though targeting women only, logistically, Sing Egyptian Women hoped to create a small copy of Arab Idol, the Arab version of American Idol: shows that involve audience participation and as such have proven to gain a wide appeal and to be very profitable for its organisers. However, unlike the Arab Idol, Sing Egyptian Women relied on votes cast by the Facebook users. Unlike the aforementioned international competitions, Sing Egyptian Women has suffered from crucial organisational flaws which directly reflect on the show’s credibility and poses questions about the benefits it could have offered to the contestants.

The competition jury has selected 41 contestants from almost 100 submissions; their videos have been uploaded on the Facebook page for the users to place one vote per day. The consecutive stages of the competition took place over a long span of time, however online voters ended up voting for the same video for days and weeks. According to the preliminary rules of the contest, having picked 41 contestants, the jury’s role ended and further votes would be done by online listeners who were to choose their favourite 16 singers. It was a surprise to many contestants when in February 2012 they were informed that the number of contestants chosen through online voting was 14 while the judges added two contestants of their own choice. Though this unexpected change in the rules allowed the judges to extend support to two contestants, for many girls participating in the competition, it was an indication of logistical instability.

According to a few contestants, the preliminary regulations did not set any limits on genre or singing language; neither were there any age restriction. The only restriction set by the organisers was that the song should be accompanied by one instrument only. Singers were also told that once the group was downsized to 16, they would be asked to present original songs. Soon, that rule too was abandoned and many singers continued to perform covers. The contestants say that at certain stage, they were told that there was an insufficient amount of original songs entries which lead to this revision.

During the press conference held at the final day of the competition at Fairmont Hotel on 5 April, the organisers stressed that singing covers is an important stage in the musical development of any singer, allowing them to explore a variety of material while searching for their own interpretation of a given song. Maiysha, the American R&B singer nominated for a Grammy for her single Wanna Be, who performed at the finale, revealed that her album, entitled Undercover, included covers with which she pays homage to many musical influences that shaped her as a musician over the years. Singing covers is undeniably an important element in helping singers develop. However, taken in the Sing Egyptian Women context, this argument does not justify constantly changing regulations.

As the competition continued, judges remained present in each step of the voting process, each time adding contestants of their choice to the winners chosen by the Facebook users. From 16 contestants, in the following round, group was downsized to ten singers (only eight were chosen online), then five (four chosen by online voters), and three (two online). Let us not forget that the contest was supposed to have only two (not three) contestants in the finale – again, this rule was changed right before the finale. No doubt the jury’s interference enabled the rescue some of interesting singers.

The competition would have had a better credibility had the organisers studied the market prior to setting the contest’s rules which then would then have been placed according to the realistic expectations. Allouba says that the whole initiative is still in its embryonic stage and that she is looking forward to organisational improvements in upcoming editions of the competition.

Throughout the voting stages, the concept of popularity dominated the contest. Though the contest offered short workshops on vocal coaching (held by Allouba), marketing and stage presence, the singers say that the process of chasing voters remained their priority throughout the event, leaving little room for actual musical development. Contestants were repeatedly asked, verbally and in the e-mails from the organisers, to assure that they reach as many Facebook users as possible.

On the other hand, the programme could have done much more to market the contestants, let alone open many important doors to them in the music production world. The involvement of popular radio station Nile FM as one of the sponsors could have facilitated short promotional features on individual contestants – through presentations of the singers, interviews, etc. – yet according to several singers, Nile FM limited its presence to airing competition’s promotional material and placing one of their presenters, Mohamed Safi, in the jury.

Three concerts organised at El Sawy Culturewheel, Abdeen Square and Radio Theatre were the only opportunities for the chosen singers to go beyond the Facebook voting marathon. It would have been very beneficial for the contestants to have Egyptian music professionals and producers attend those events.

Though the contestants’ responsibility for finding voters was among the factors that contributed to their getting exposure, the way such responsibility was implemented placed the singers under a great stress. One of the singers, in her late 20s, points to the fact that, having paid more attention to her singing than any other interest, it was impossible for her to compete with much younger contestants receiving votes from hundreds of their school or university colleagues who spent hours daily on Facebook. As such, several contestants blame the voting system for the loss of valuable singers along the way. Singers, as well as Allouba herself, point up talents such as Mariam Ali, Dina El Wedidi, who did not make it to the finals simply because they were unable to win “the Facebook popularity contest.”

No doubt, Sing Egyptian Women started out as a commendable initiative, but it shed its values through the lack of effective marketing and logistical backbone – elements from which both organisers and contestants would have benefited. The initiative is young enough for such defects to be turned into indicators of areas where improvement can be made. This and similar contests can become effective women’s empowerment tools or they can even benefit a larger cross-section of singers and musicians.

Aside from all that went wrong, it was important to realise that Egypt has many extremely interesting women singers, whether amateurs or professionals. At the same time, contestants had a chance to interact with each other and develop new acquaintances. Now that the winner, Nathalie Alain, will head to New York for a short recording session, we are left with several poignant memories on Facebook.