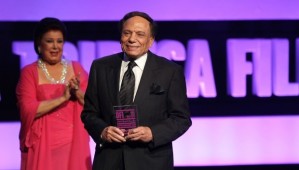 When Asran Mansour, a Salafi lawyer, filed a case against Adel Imam, renowned Egyptian actor, for “defaming Islam” in his films, no one expected that the verdict issued on 24 April 2012, by Judge Mohamed Abdel Aty would sentence Imam to three-months hard labor and a fine. Though the case was dropped on 26 April afternoon, the news outraged Egypt’s artists and equally angered international supporters of freedom of expression and creativity.

Adel Imam’s case is one of the many indications that Islamists are implementing limits on culture and freedom of expression. Also on trial with Imam were directors Nader Galal, Sherif Arafa, and Mohamed Fadel, and writers Wahid Hamed and Lenin El-Ramly, who faced the same charges of “defaming Islam.” Their cases were also dropped on 26 April.

The arts and culture scene will not be silent regarding Imam’s sentence—just as it will not remain passive when challenged by many other limitations posed on culture. The fight against such religious-based censorship is expected to be a long and painful one for all of Egypt’s creative minds.

In Egypt—and in other countries involved in the Arab Spring—Islamists gained a significant popular support and made their way into a number of legislative bodies. Egypt’s Freedom and Justice Party (formed by the Muslim Brotherhood) and a number of more radical Salafi parties gained a total of over 70 percent of seats in Parliament. Though the Brotherhood and the Salafis differ in their visions, it is the concept of creating ‘culture’ within this conservative society that is troublesome to Egyptian artists and intellectuals.

The past few months have seen numerous incidents in which Islamists have challenged freedom of creativity in the Arab World. In Tunisia, recent attacks by Islamists on artists participating in an event called The People in Defense of Theater outraged the whole theater community. Another example is the physical assault and trial of head of Tunisian station Nessma TV, Nabil Karoui. The incident, which occurred after the station aired Persepolis—a film with a scene depicting God—hit a nerve in the international cultural scene.

In Egypt, the Salafis’ statements not only oppose intellectual freedom and progress but also testify to lack of understanding of their country’s cultural wealth. In his speeches Abdel Moneim El-Shahat, the spokesman of Al-Da’wa Al-Salafiya (The Salafist Call), has called for a ban on works by Naguib Mahfouz, a 1988 Nobel Prize laureate in Literature, for being an “atheist literature that calls for vice” with themes revolving around “prostitution and drugs.” El-Shahat also suggested covering statues of the Pharaohs in wax to put an end to the “idolatry.” No actual action was taken, and El-Shahat failed to win a seat in the parliamentary elections. His ideas are, however, an example of a mindset that artists and intellectuals fear the most. Meanwhile, other Salafis have called for banning all love scenes in past and present Egyptian movies, including scenes in cinematic gems with Abdel Halim Hafez and Nadia Lutfi, both indisputable icons of Egyptian culture.

In March, filmmaker Ahmad Abdalla was refused permission to shoot a scene for his movie in a mosque because of a decision issued by the Egyptian Ministry of Awqaf—a government body in charge of religious endowments. This decision was reversed by a senior Muslim Brotherhood leader, Mohsen Rady. In his statement for Ikhwanweb, the Muslim Brotherhood’s online platform, Rady said: “We safeguard the principle of freedoms for creativity, so long as it does not conflict with prayer times. We want to fulfill the mission of art that benefits the community.”

Still, the Brotherhood has not condemned any other statement or any other action made by Salafis. Equally, the Brotherhood never commented on Adel Imam’s case. Neither did they release a comment denouncing the security forces storming the Ismailia Cultural Palace and destroying theater seats on 5 April 2012. While the Muslim Brotherhood claims to have promoted a number of cultural activities in the film and theatre sectors, artists remain skeptical that these works will be anything other than a propaganda machine serving the Muslim Brotherhood’s own interests, without addressing culture as a whole.

Bahaa Taher, one of Egypt’s foremost literary figures, does not seem concerned about the Muslim Brotherhood’s plans to get involved in culture. “They are free to create their own cultural products and become competitors in the field. However, what Islamists need to keep in mind is that they cannot impose their ideas on the creative productions of the others,” Taher told The Majalla.

Censorship remains an open debate among artists and intellectuals. On several occasions, Egyptian Minister of Culture Shaker Abdel Hamid, showed his awareness of the limitations that challenge the post-Mubarak arts scene: whether they are political, social or religious.

In an interview with Ahram Online, the Minister expressed that Egypt had entered an era in which artists will need to hide behind masks: “Artists will have to operate with symbols; they will wear masks instead of inciting direct artistic conflicts as used to be the case.” While artists expect stronger support from the minister, Bahaa Taher tells The Majalla that he is very worried about the situation. “It is the government’s role to support all the intellectual and creative values. The Ministry has a historical role in supporting the progress.”

Unlike in the US, culture in Egypt is not produced by independent organizations. In Egypt, activities of individuals and small artistic organizations will not create a sufficient impact. Taher recalls the 1960s—the golden years of Egyptian culture under the minister Tharwat Okasha, who founded many cultural institutions including the Cairo Conservatory and the Higher Institute of Ballet. But those glory days are long gone: according to the current minister, Abdel Hamid, ballet will be on the top of the list of Islamists’ censorship on culture. Hany Hassan, dancer and choreographer with the Cairo Opera Ballet Company, says, “We need a minister that would protect us with strong public statements.” Hassan points to the Minister’s direct communication with the artists, which does not find reflection in the mainstream media.

Tamer Fathy, a choreographer, expects fierce confrontation between artists and Islamists will happen very soon. “It is boiling and will explode soon. Only after the direct confrontation, the arts scene will redefine its position and artists will start strongly defending freedom of creativity and expression.”

A few days prior to Imam’s verdict, Karima Mansour, choreographer and newly-appointed artistic director of the dance centre at Cairo’s Creativity Centre, thought this fear has been exaggerated. “I am neither blind nor in denial. As long as there are no concrete actions censoring art on religious basis implemented, Egyptian artists should stop anticipating problems and continue working. Let’s cross that bridge when we come to it.” In parallel, however, Mansour pointed to another phenomenon: self-censorship exercised by some artists who lack confrontational abilities. While Egypt’s Minister of Culture suggests “wearing masks,” to date there have been no fierce confrontations comparable to those in Tunisia, for example. Taher comments that self-censorship has no remedy and is one of the worst paths that creative people could choose.

The direction of Egypt’s cultural scene has yet to be redefined in light of the increased presence of Islamists in Egyptian politics and society. Taher emphasises that “the revolution is ongoing and it will take time to see the results. It is important however that artists create one strong force and act together.” For Egypt, it may be that Imam’s sentence is the spark that will trigger the explosion anticipated by Fathy and Mansour. The upcoming weeks will show strength of the Egypt’s culture scene and how it will address many troublesome issues.