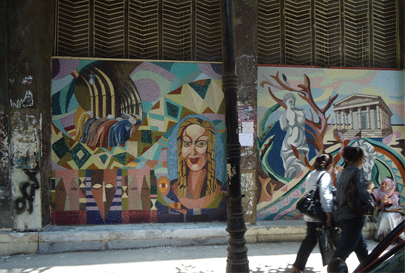 Students contemplate the future of art in Egypt as they wait for their graduation projects to be marked at the Faculty of Fine Arts, Helwan University in Cairo.

Fourth years students at the Faculty of Fine Arts, Helwan University in Cairo waited for their professors to grade their graduation projects on 10 July.

Large mosaics decorate the faculty building that houses the design department overlooking Ismail Mohamed Street in Zamalek. Over the past few months, the same walls were covered with graffiti depicting themes from Egypt’s 2011 revolution.

The new mosaics were produced by students working in teams of two to five members, under the supervision of Professor Sabry Mansour, professor of Painting and Mural Art at the faculty, one of Egypt’s so-called ‘4th Generation’ of artists.

The students were free to choose their own themes, while putting the accent of a specific artist or trend into their work. While some compositions recreate Greek art, others follow 20th century trends, such as cubism or are influenced by specific artists, such as Pablo Picasso or Egyptian Hassan Fathy.

Lilian Ramses and Hadir Galal worked on a mosaic that is a tribute to Hassan Fathy (1900-1989), an internationally renowned Egyptian architect, who integrated his deep awareness of Egyptian rural life with ancient architectural design techniques. The village of New Gourna, Upper Egypt, is one of the best known Fathy’s designs, executed between 1945 and 1948, and reflecting his ideas on architecture compiled in his book Architecture for the Poor.

“This is the only mosaic work that includes portraiture,” Ramses tells Ahram Online. “Our group wanted to shed light on this remarkable architect, hoping also that people who pass by would stop for a moment to think.” The mosaic combines views of the village with a portrait of the artist.

Young artists who are about to enter the market discover that mosaics are not the most popular art form in Egypt. They know they might have to wait for a long time between commissions.

Amr Ghanem, who worked on mosaics stressing ancient Greek art trends – depicting architectural, sculpture and landscape elements from the era – says the Egyptian market is filled with work in commercial decorative mosaic, such as the decoration of villas walls and floors or accents added to swimming pool areas.

“It is important, however, that we keep creating art,” Ramses adds. “The financial demands will always force us to do commercial work, yet, as our professors keep underlining, we have to remain aware and persistent in pursuing artistic creations as well.”

The entry of these young artists into the market will not be easy as they will be forced to overcome many obstacles. In parallel, Egypt is going through many new challenges, including religious and social pressures that artists will have to deal with. The graduates have mixed feelings regarding their artistic freedom.

Ramses is worried about the rising trend of religious groups, giving Tunisia as an example that she expects Egypt will follow.

“We see what is happening in Tunisia, such as when the Salafist Islamists destroyed art works at the Printemps des Arts. I expect Egypt to face the same problems or maybe even more,” Ramses said, adding that she would consider leaving the country if the situation for artists got worse.

Hadir Galal, however, doesn’t fully agree: “I think the fear is exaggerated. Egypt will never be imprisoned by religious or ideological limitations.”

Galal looks at art from a different perspective: “I will never be able to express nudity, for example. Though personally I don’t like those themes [nudity motifs], I am not against any art form or any thematic content. Everyone should be free to express themselves  as long as it serves his artistic purpose.”

The mosaics are the last works created by these students during their university careers. Some of them praised the faculty but complained they were limited to classical art and were unable to experiment with new styles. Let us hope they can continue their artistic development in an Egypt that permits free artistic expression.