On 11 September and following 10 days of theatrical events, plays, online seminars and discussions, the activities of the 27th edition of the Cairo International Festival for Experimental Theatre closed with an official ceremony held at the National Theatre.

The closing evening opened with a performance titled Thoth, directed by Sameh Basyouni and staged by the students and graduates of the Higher Institute of Theatrical Arts.

The show was followed by the announcement of winners and the distribution of the awards in the presence of culture minister Ines Abdel-Dayem and the festival’s president Alaa Abd El-Aziz Sulaiman, a renowned theatre practitioner and academic.

It is important to underscore that the festival saw light despite the previous ministerial plans to cancel this year’s edition, motivating the move with inability of creating an event that would bring justice to the festival’s long and rich history. 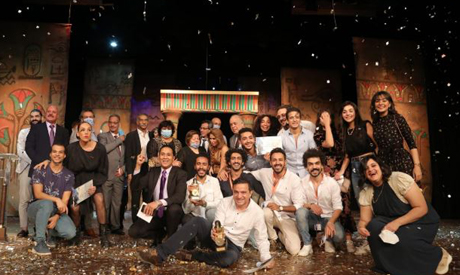 A different edition during Covid-19

The festival was eventually launched on 1 September, naturally refrained by many limitations due to Covid-19 pandemic: the inability to invite international theatre-makers and staging local performances to a limited number of audience. The edition, however, was enriched by some long-term strategical moves.

At these unusual times, Sulaiman created a unique version of the festival where the plays (Arab and international in addition to one from Egypt) were screened online participating in competitive segments. The Egyptian plays performed across Cairo theatres got their own competition and awards, the first time in the festival’s history.

Not only did Sulaiman’s managerial strategies and organisational tweaks aim at rescuing the festival’s 27th edition, but he wanted to bring this edition a step closer to the older editions of the Cairo International Festival for Experimental Theatre (CIFET).

Founded in 1988 by then-culture minister Farouk Hosni, the festival was known as the CIFET and carried a competitive character. Following the interruption caused by the January 2011 Revolution and after a five-year hiatus, the festival returned in 2016 with its 23rd edition, a new name — the Cairo International Festival for Experimental and Contemporary Theatre (CIFCET) — and a non-competitive character.

In the 27th edition Sulaiman returned the original name of the festival and its competitive character. Two new segments stood out: Recorded Performances and Lockdown Performances, which included shows screened online.

It was not hard to notice that the usual sparkle that comes with such events was somehow missing, something that some audience members and critics rightfully pointed to. Lack of the festive character, the buzz that comes with theatre artists and their audiences, discussions at theatres and hotel lobbies, alongside other elements that characterise any cultural festival, could not be held owing to the pandemic.

This atypical situation disappointed theatre-makers, audiences and critics, and this is probably the reason that the festival felt the need (alas, unnecessary) for self-justification expressed through the performance staged during the closing ceremony. 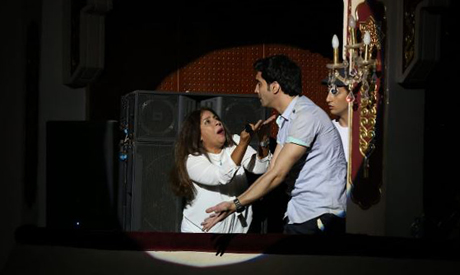 From justification to overly direct images

Titled Thoth, the closing performance was written by Mohamed Mabrouk and consisted of three segments with only the last one relating to the play’s name, the ancient Egyptian god of writing and learning presented quite briefly on stage. Side note: Thoth is the statuette for CIFET’s major awards.

The first scene presented a group of young people trying to explain to a media representative the festival’s details, its segments, awards, etc.

Unless we are addressing a very young and inexperienced audience, there was no need to capitalise on repetitive explanations about the festival’s positioning this year. With the exaggerated self-explanations, not only does the script underestimate the valued audience’s understanding of the festival under Covid-19 realities, but it also puts one of the oldest Egyptian festivals – and the pride of many theatre-makers – in a position of need to justify itself.

The second part of the performance used the metatheatre technique by introducing the playwright seated on the balcony expressing his disappointment about the events on the stage which do not represent the play he actually wrote. To make the situation more comic, Mabrouk added the playwright’s mother whose role on the same balcony is to fight with him over some unimportant issues. The metatheatre or metadrama is always an attractive segment of a theatrical work and it is probably this segment that had a clear idea and mise-en-scene work present during the closing evening.

Scene three saw the appearance of Thoth that is walked through a sequence of dances representing different countries and cultures. The scenography by Mohamed Saad (the backdrop of a world map divided to shed light on six continents) and costumes by Ahmed Abd El Aziz (with continents drawn on the backs of jackets) provided direct explanation to each dance presented.

While we were treated to the simple, yet well-designed choreography by Karima Bedeir following each culture with movement, the scenography and costumes left little room for the audience’s reflections or imagination. 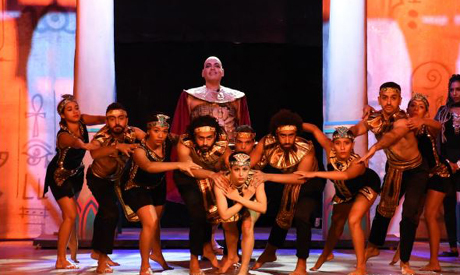 Pulling an exceptional or an unusual edition and convincing the audience of the festival’s values is definitely a big task. However, the ending ceremony is a work that should not be affected by the unusual organisational situation.

While in Thoth the efforts of the students and graduates of the Higher Institute of Theatrical Arts were evident, there was still space for more thought on the part of the playwright and time needed for the director to work with the actors. The imperfections in gags and slapsticks intertwined with overly direct messages made it harder for the performance to level with the important event’s closing work.

Once the performance ended, the culture minister and festival’s president took the stage and the announcement of the winners began. This is the most important segment in any national or international festival. With Abdel-Dayem and Sulaiman giving the proper weight to the moment, the greatest disappointment came with the presentation of awards for the Recorded Performances and Lockdown Performances.

The unusual circumstances of the festival cannot explain the awards presenter Nesma Youssef Idris stepping unprepared on the stage, trying to find her way between the papers and trying not to mix up the winners, and at times finding it hard to formulate well-structured sentences.

Putting the drawbacks aside, it’s time to focus on the positive efforts exerted at the festival which was destined to meet the fate of its international peers that were cancelled. The festivals that survived cancellation had to either move their activities online, or limit the audience and the number of actual events on the ground. In such unusual circumstances, the usual understanding of the festival or a festive atmosphere can be taken with a degree of tolerance.

A day after the festival’s closing, when the plays are no longer available online or in theatres, we emerge with many reflections as we are enriched with a good number of theatrical experiences that would have never seen the light hadn’t it been for CIFET’s 27th edition. And when one year from now, we attend the 28th festival, we will have its original name and competitive character already established – this in itself is a win.