Founded by an Egyptian composer Ayman Helmy in 2015, Bahgaga fuses songs with light acting, presenting the repertoire in a humorous manner

On Friday 4 September, Egyptian band Bahgaga will take the stage of El Sawy Culturewheel with their first performance since the coronavirus-related shutdowns.

“We are very happy to return to stage with a celebration of our fifth anniversary,” composer Ayman Helmy, Bahgaga’s founder and manager, told Ahram Online, adding that Bahgaga’s very first concert was held in September 2015.

According to Helmy, the band had dynamic plans for 2020. In January alone they gave three successful concerts, followed by a concert in the first days of March, performing at Darb 1718 Egyptian Contemporary Art and Culture Center as part of International Music Freedom Day.

“We were preparing a performance for 21 March, to be held on Mothers’ Day, but it was cancelled,” Helmy said.

The Egyptian authorities shuttered cultural venues, including performance spaces, from 9 March, as part of a series of measures in light of the pandemic.

Bahgaga consists of seven instrumentalists and five female singers. The musical line-up incorporates rhythmic instruments, bass guitar, violin, accordion, piano, and oud. Although Helmy can play the oud, he usually relies on another musician to play the instrument, as he takes care of all other musical and organisational aspects. 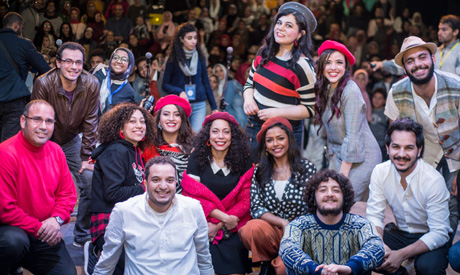 Bahgaga’s specialty is presenting Arabic songs while fusing music with a form of acting, so as to incorporate a well-known format which was popular in Egypt from the 1920s to the 1960s.

“Among our aims is to cultivate and further develop Egypt’s history of music theatre and music sketches, known as ‘monologues’ in Arabic music terminology,” Helmy explains.

The art form includes pioneers such as Sayed Darwish (1892-1923) and Mohamed El-Qasabgi (1892-1966), who composed numerous music monologues. The format is similar to that of the musical theatre wherein a solo singer is under the spotlight, or an opera aria.

In their turn, comedy music monologues – resembling comic skits – are those known to the audience as performed by the Egyptian comedians Ismail Yassin (1912-1972) and Mahmoud Shokoko (1912-1985).

“Comedy monologues were very popular across Egyptian cinema and theatre, with iconic names acting and singing the repertoire, always topping it with lively comedy. With Bahgaga we rely on solo performances, but also create duets or group musical sketches,” he says, referring to famed actors who formed duets, such as Ismail Yassin and Shadia, among many others.

Most of Bahgaga’s songs are composed by Helmy, with lyrics either taken from well-known poems or written by the musician himself.

“Around a third of our repertoire comes from known compositions. In this case, the arrangement that I make gives a new vision to them,” he says.

Bahgaga’s dynamism is not accidental. As Helmy explains, by the end of 2019 he had decided to dedicate himself fully to the band. 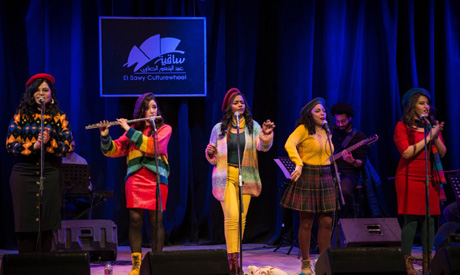 “In previous years, I also worked in music management and in translation. Bahgaga was performing once a month or even less frequently. This was simply due to the fact that I was often preoccupied with many other responsibilities. Now, however, I want to give all my attention to the band. We had a great return in January and though it was interrupted by the pandemic and cultural shutdown, we will continue with the same passion now,” he explains.

A band like Bahgaga is a great responsibility indeed. Helmy says he is always preoccupied with the many creative and managerial responsibilities, but he plans to delegate several of them to new team members.

“Our upcoming concert will include a lot of fun while reminding us of the musical format cherished by many Egyptians. And since it marks our fifth anniversary, we have decided to invite several guest performers, singers who have performed with Bahgaga over the past years,” he says.

The concert will include appearances by Mohamed Fahim, who performed with Bahgaga two years ago; Mahmoud Al-Khatib from Hawas band; and singer and radio presenter Zahra Rami, among others.

The upcoming concert will take place on Friday 4 September at 7:30pm, at El Sawy’s River Hall, with precautionary measures in place in order to curb the spread of the coronavirus, including restricting the attendance to 25 percent of normal capacity.