The orchestra gave two consecutive concerts on Thursday 26 November, at the All Saints’ Cathedral in Zamalek

Amateur music ensembles are no commonplace occurrence on Egypt’s classical music scene. While in many parts of the world independent amateur musicians, choirs, and community orchestras perform at schools, colleges, clubs and theatres, in Egypt such formations, which usually feature vocalists rather than instrumentalists, can be counted on the fingers of one hand.

This is what makes the Egyptian violin teacher and performer Khaled Saleh so remarkable. Dedicated to effecting a change in the dynamics of amateur music, his latest initiative is the newly formed Isis String Orchestra, consisting of 45 amateur performers from all walks of life. The ensemble gave two  heartwarming concerts on Thursday 26 November, at the All Saints’ Cathedral in Zamalek (Gusour Cultural Centre). It seemed effortless, but it was the culmination of a complex journey.

It all began in 2016, when Saleh founded the Osiris String Orchestra, a project to develop and provide performance opportunities for amateur musicians, which lasted two years. Supported by the Awtar Quartet (founded by Saleh in 2012 and made up of professional musicians), training and rehearsals took place at a dedicated space, Osiris for Art Production and Training – an unprecedented opportunity for amateurs. But in 2018 Saleh left and the project eventually folded. 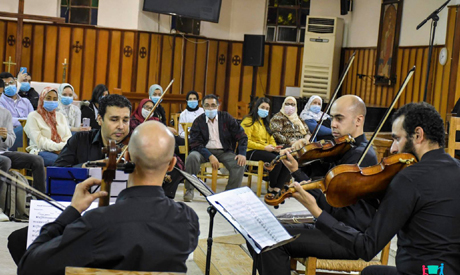 It took Saleh two years to re-launch the project under the name of Isis, with rehearsals taking place at a new location and no involvement from the Awtar Quartet. “The Osiris orchestra started with ten musicians, the number growing from one concert to the next,” Saleh says.

Having made his mark in the field, when over three months ago he announced his return to the orchestra project, a large number of string players from many Egyptian governorates applied for the opportunity to join the ensemble. Saleh required that musicians should have some experience of playing violin, viola or cello and the ability to read music even if neither skill was of professional stature.

“We held auditions and accepted 56 musician but 11 of them dropped the ensemble before starting or during the three-months rehearsal period for various reasons, so we ended up with 45 amateur musicians from Alexandria, Port Said, Suez, Damietta, Banha and Al Qanater in addition to Cairo, ranging in age from nine to 63 though most were in their 20s and 30s. Some of the musicians were already involved in the Osiris ensemble while others were new to the project,” Saleh explains.

For the three-month rehearsal period – “a season”, as he calls it – the Isis String Orchestra met once a week, in addition to online training. It stood out from Osiris by a larger number of violins and celli as well as the addition of a double bass. 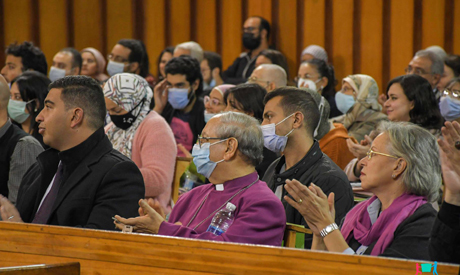 Musicians started out excited and eager to enjoy playing, but they soon encountered the more challenging strictures of the trade. Their musical passion had to be set within the professional confines of performing in a group. This, as they soon discovered, supplemented rather than supplanting their joy. They learned all that professional musicians will have already mastered: commitment and accountability towards peers and audience as well as concentration and the ability to work as a team, listening to the conductor and to one another, supporting each other, cooperating and finding inspiration for practice no matter how tedious it becomes.

With a skillful  facilitator like Saleh, amateur musicians not only overcome those challenges but they also develop individually and as a group.

A graduate of the Cairo Conservatory, where he also earned his PhD and where he still teaches, Saleh earned his MA from  Indiana University in 2011. A Fulbright alumnus, he is a former Cairo Symphony Orchestra violinist (2004-2009) and has been a member of the Committee of Music, Opera and Ballet at the Supreme Council of Culture since 2017, as well as a coordinator and jury member of the Nicolas Latif string competition. He is also a violin instructor at the Al Nour Wal Amal Orchestra, which is made up entirely of blind woman musicians. 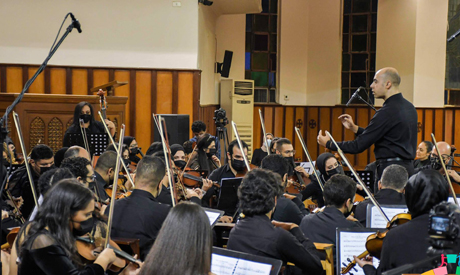 The last concert by the Isis String Orchestra testified to the musicians’ dedication and Saleh’s ability to guide them through a process of development. At the All Saint’s Cathedral, a full house through both consecutive concerts, the audience was taken on a wonderful journey through music and ages.

The concert began with Saleh’s own performance of J.S. Bach’s Chaconne from Partita no. 2 for solo violin, one of the most difficult compositions for the instrument which encompasses the full emotional range: a truly impressive choice. Then the Awtar Quartet took the stage to perform Rachmaninoff’s Romance from String Quartet no.1.

Finally the stars of the evening came on as the Isis String Orchestra, joined by Awtar and a few of Saleh’s Cairo Conservatory students, played works arranged for strings by Saleh: Purcell’s Rondeau from Abdelazer, Gluck’s Dance of the Blessed Spirits (from Orfeo and Euridice), three themes from Beethoven’s symphonies (the 5th, 7th and 9th), The Toreadors from Bizet’s Carmen, Caccini’s Ave Maria, The Montegues and Capulets from Prokofiev’s ballet Romeo and Juliet, and Hans Zimmer’s Pirates of the Caribbean Suite.

It was clear that this panorama of forms, styles, composers and ages – from Baroque, classical, Romantic to a contemporary film score – was not accidental but rather designed for musicians to explore different colors and techniques. 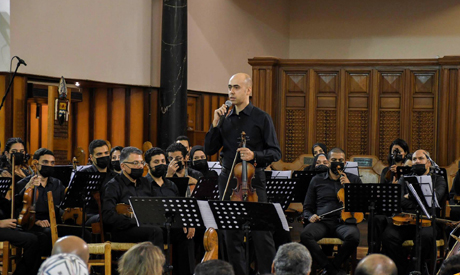 “When choosing a programme, I take several parameters into consideration,” Saleh says. “First of all, the works have to be compatible with the skills of the musicians. On the other hand, I wanted to tackle different techniques that help in the development of the performers. Also, since the first weeks of rehearsals, I was thinking about the Cathedral hosting the concert. I wanted the programme to fit the location.”

Listening to the amateur musicians on stage, one of my first responses was recognition of their efforts and passion. Both factors were clearly coming through with each composition, each bow movement and each face focused on the task at hand.

The acoustics of the cathedral further emphasised the power of the ensemble in the tutti sections which, though they remained enjoyable, imposed an additional challenge on the musicians. The reverberations made it more difficult, even for the professional players, to listen to one another and move the music forward. This however did not affect the amateur orchestra’s ability to deliver balanced sound in most compositions, a testimony to their meticulous preparation.

Of course, amateurs cannot be judged by professional standards. In their first performance Isis went far beyond what is to be expected of an amateur ensemble: Saleh evidently set the bar very high, and made sure the players reached it notwithstanding their impressive number. 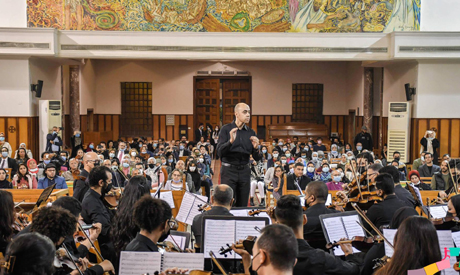 Strengthened by the support of their families and communities, which is very evident, all had a passion for music and an openness to bringing it into their life no matter what that life revolved round. With such qualities at its core, it is only natural that the initiative should have the potential to grow and spread beyond Cairo. Saleh says he is toying with the idea of reaching out to other governorates, yet time will tell how this could be realised.

“I plan to hold the next season in Cairo starting at the beginning of February 2021 so as to hold a concert on the last weekend before Ramadan begins. I have received a lot of questions from amateur musicians in Alexandria asking if we can work there. I still need to think about it, taking into account whether the potential location would accommodate the orchestra’s rehearsals and performance. I might go for it in the summer.”

While such growing interest is a major gain for Saleh and for the community at large, it also generates more complex logistical pressures. Undeniably managing such a project is not an easy task. As Saleh revealed both during the concert and in our conversation, he remains grateful to everyone who has extended support to the Isis String Orchestra, especially his wife Hajer Nawar.

“It is impossible to do everything alone. Hajer is very professional in her organisational skills; she is also in charge of social media. On all kinds of levels,” he says, “it would be much more difficult without her.”