“I spent most of my life in theatre; more time than I ever stayed at home. In fact, theatre is my home. I wanted to share my passion with others and let the younger generation uncover riches they do not know much about…”

Thus Manal Ebrahim, long-standing assistant director and director at some of Egyptian theatre’s most important centres, introducing the wealth of professional and personal experience she shared through her recent exhibition at Behler Gallery in Downtown Cairo in 11-26 March. Carrying the self-explanatory title “I Passed By…” (‘Mareit’), exhibition – a kind of scrap book writ large – was filled with memories and people who crossed Ebrahim’s path, both people she worked with and people whose productions she attended.

However, the exhibition is not only Ebrahim’s personal journey as a theatre maker or spectator; it is also a much deeper testimony on an important segment of the history of independent theatre in Egypt during the years 1988-2004.

Ebrahim has a lot of experience in the field, with over three decades of work as an assistant, executive director and stage manager. Besides theatre, she was also involved in a number of dubbing projects: she worked as a dubbing assistant director of the Timon and Pumbaa cartoon series, the dubbing production manager for Pooh in Christmas and Shrek 3, among others. But theatre has always been the art form closest to her heart, a creative sector in which she explored everything, from managing the actors to making sure the smallest accessories were in place. No wonder she is now ready to share her memories with a larger audience. 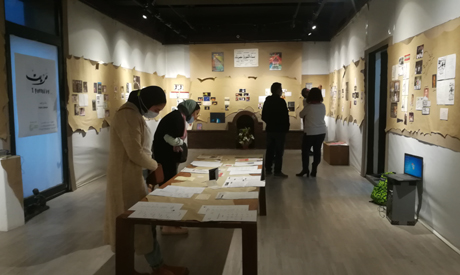 Ebrahim converted her memories into clippings for the giant scrapbook that was “I Passed By…” by displaying the pamphlets, programme notes, photos from the performances, publications issued during theatre festivals and even some personal correspondence with the theatre makers.

The show is a fragment of Ebrahim’s journey that speaks of her passion. This unique haven includes reflections of times that are lost in oblivion or, in the best cases, are about to be forgotten. The years when theatre creators and attendees didn’t have the opportunity to share their experiences on internet platforms or social media would be completely erased from our consciousness if not for projects like “I Passed By…”

Only some books and archival articles, many of which are read only by people strongly interested in theatre, bear testimony to Egyptian theatre of the period covered by the exhibition. From the standpoint of today, those years are severely underrepresented and as such are hardly known at all to the youngest members of the creative community.

“The exhibition focuses on the years before the age of the internet,” Ebrahim says, explaining why today’s young theatre practitioners might not be aware of the many important productions characterising the decade on which she focuses. 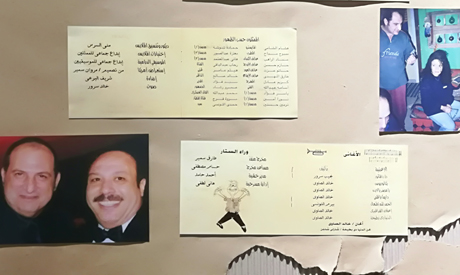 “I have been working with many young people, including students of Al Darb Al Ahmar Arts School. I realized that they do not have any knowledge of the theatrical practice of this time and many names who worked in those years do not ring a bell to them. I felt responsible for unveiling the riches born at the hands of many such directors. I was thinking about writing a book but many people do not really read. So I decided to hold an exhibition where I would not talk about myself but rather present the people I worked with or met, and the performances I attended.”

Ebrahim begins her story with 1988, the year the Cairo International Festival for Experimental Theatre (CIFET) was launched, when she worked with Intessar Abdel Fattah on his Darabouka performance.

As the pamphlets, photos and notes multiply on the hall’s walls and a large table in the middle, we encounter numerous other plays: Macbeth (1993) directed by Saleh Saad, produced by Al-Shabab theatre, which represented Egypt in the CIFET; The Stable (1995) directed by Ahmed Mokhtar and produced by Al-Talia theatre; Mannequins’ Ball (Haflet Manekan, 1996), translated from Polish to Arabic by Hanaa Abdel Fattah who also directed the play at Al-Hanager theatre; the musical The Wig (Al Barouka, 1997) staged at Al Balloon theatre to music by Sayed Darwish, and directed by Ashraf El-Noamany;  The Black Rabbit (Al Arnab Al Eswed, 1999), directed by Essam El Sayed and performed at Al Talia theatre before it took part in numerous Arab and international festivals; among others.

As we walk through the display we follow Ebrahim’s work on many stages and her participation whether as maker or spectator locally, regionally and internationally. We also meet many people who crossed her path leaving an important imprint on her journey but also on our cultural awareness.

But, besides showcasing the theatrical artefacts and presenting theatre makers, the exhibition affords a peek into a reality that is no longer there. For example, as Ebrahim explains, in those days, publishing pamphlets or brochures related to a performances required much more effort by all parties involved, something made much easier by modern technology.

She clarifies the role of an assistant director or a stage manager, comparing it to an unknown soldier who carries huge responsibilities in the whole production: “An assistant director follows the vision and instructions of the director. This can be defined as a support in executing the play. The role of an assistant director or the executive director differs depending on the director, so does the division of labour. I could be in charge of coordination of lights, sound, scenography changes. During the performance I might coordinate the entry of the actors onto the stage,” she explains, pointing to the many roles she played during rehearsals and performances.

Undeniably, in over 30 years of theatre work, this broad range of responsibilities allowed her to understand each and every detail of the performing arts dynamics. Topping that with many workshops she attended, it is no wonder Ebrahim has also tried directing herself. The plays directed by Ebrahim include Too Late (Fat El Maad, 2001) at Al-Hanager and The Last Story of Scheherazade (Hekayet Scheherazade Al Akheera, 2003), a show and acting workshop project staged at El Sawy Culturewheel and the Gezira Arts Centre. 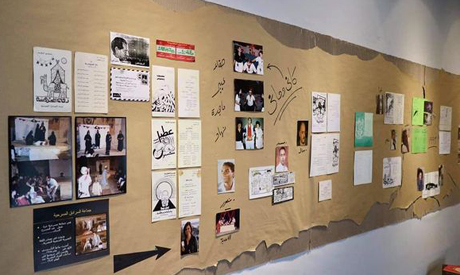 While an important document of years that will never return, “I Passed By…” is also a touching testimony to the years when the independent theatre was at its best and a tribute to many people who believed in its importance in the cultural development of the country.

“The realities have changed,” Ebrahim notes stressing the fact that more support should be extended to all theatrical practices.

“Theatre builds people’s minds, it forms generations. It is through the theatre that people get to know themselves; it helps them develop, think, analyse life, and pushes them towards many important ideas. Theatre is a beautiful exchange between art and people; it invites us to open our horizons and raise awareness,” she comments.

On the other hand and in many ways, Ebrahim’s project also reminded me of Nehad Selaiha (1945-2017), whose dedication to Egyptian theatre and particularly its independent meanders was exemplary. A profound academic and knowledgable theatre critic, Selaiha spent decades documenting the theatrical movement on those pages, and her writings are an incomparable resource. 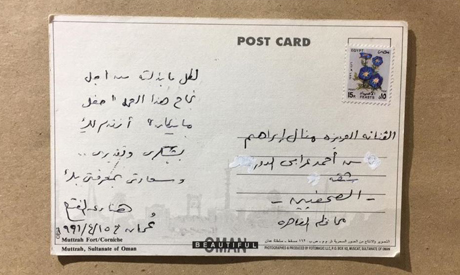 Likewise Ebrahim has given us a small glimpse of the same material in a very different, visual way. It only makes sense that with her own creative vocabulary, Ebrahim should continue to highlight her journey. As she revealed, the project does not stop here and she plans on a bigger exhibition to take place some time by the end of this year. Meanwhile, she is also working on Outside the Box (Barra Al-Sandouk), the script for a play that she will be directing.

It was clear that “I Passed By…” touched hearts and probably squeezed a tear or two out the eyes of the generation that was privileged to be alive during the days presented by Ebrahim. The warmth of presentation, the choice of material on display and its arrangement (a task in which Ebrahim was supported by two young creative people, Kareem Abdel-Naeem and Hamsa Mohamed) infused the hall with a sweet nostalgia.

Ebrahim’s exhibition was attended by many young people eager to discover the past, and an older generation recalling its own distant days.

This in itself is a great success. 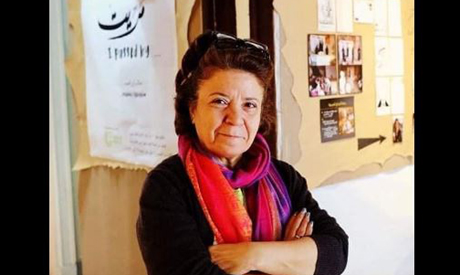