The staging of Zorba will be made available by the Ministry of Culture on its YouTube channel, starting 7 June 2020 at 9pm

The release of Zorba performed by the Cairo Opera Ballet Company on the Ministry of Culture’s YouTube channel is not an event to pass unnoticed. With viewers able to watch the classic starting 7 June at 9pm, it is also worth looking into the unique history of this ballet in Egypt.

Since 2001, the ballet Zorba has been performed at the Cairo Opera House Main Hall stage almost every year. The ballet is staged to choreography by Lorca Massine, costume and set design by Richard Kaja, one of the biggest names in Polish set and poster design.

The ballet is adapted from the novel Zorba the Greek (1946) by the Greek writer and philosopher Nikos Kazantzakis.

Over the years, music by Mikis Theodorakis, one of Greece’s best-known composers, was played by the Cairo Opera Orchestra under the baton of numerous conductors, including Nader Abbassi, Nayer Nagui, and prior to them Giorgio Croci from Italy and Ivan Filev from Bulgaria.

Theodorakis’s music reaches out to folk Greek elements, and is filled with lovely light motifs. Sirtaki dance, performed at the end of the ballet, is one of the most vital elements of the whole work.

Choreography, simplicity and repetitive tableaux take on their own charm when accompanied by lyrically touching musical elements and folk colourisation. In ballet, simplified dramaturgical elements allow direct human experience to emerge and captivate the hearts of audiences over and over. 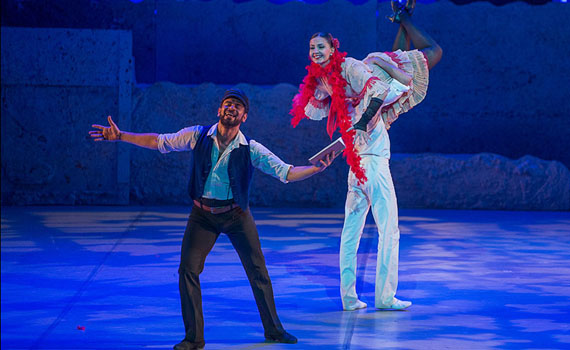 But music is not the only reason for Egyptian audiences to admire Zorba, giving it higher attention than other equally valuable works staged by the Cairo Opera Ballet Company.

Big credit goes to Hany Hassan, principal dancer of the Cairo Opera Ballet Company who over the years gave a unique touch to the main role, hailed for his performance internationally.

For many years and throughout several seasons, Hassan’s ballet skills woven into a highly emotional approach to the ballet’s protagonist brought him a well-deserved recognition. He has definitely created a significant imprint on this ballet’s history in Egypt.

As Nihad Allam puts it in her 2013 review of one of Zorba’s stagings: “Hassan has a natural affinity for the role of Zorba. His heartfelt and effortless performance in the role since 2002 have led to him becoming known as the ‘official’ Zorba in Cairo.”

It was prior to this performance that Hassan was offered a surprise gift — a statue depicting him dancing in the ballet.

“The bronze statue, called ‘The Egyptian Zorba’ was made by artist Ossama El-Serwi, arts counselor at the Egyptian embassy in Russia, in recognition of Hassan’s talent and patriotism,” Allam continued.

But though for many years Hassan was identified with Zorba, since 2013 the role has been also portrayed by other skilful dancers: Ahmed Yehia and Amr Farouk, among others, each of whom gave a unique touch to the character, bringing new colours of the protagonist to the fore.

Another element highlighting Zorba in Egypt’s ballet dance history is the fact that in 2013 the ballet became associated with artists’ struggles against obscurantism, an association triggered by nationwide protests against then-President Mohamed Morsi.

In May 2013, when artists stormed the Ministry of Culture, holding a sit-in and demanding the removal of then Minister of Culture Alaa Abdel Aziz (appointed by Morsi), Zorba was the highlight of the series of performances staged by the ballet troupe in front of the ministry’s building.

Commenting on those events, in September 2013, three months after the removal of Morsi from the presidency, Erminia Kamel, artistic director of Egypt’s ballet troupe, said: “The Cairo Opera Ballet Company wanted to add their share to the street performances, to the opposition against the minister and against the then ruling Muslim Brotherhood. They also wanted to show that despite a statement pronounced by a Salafist MP calling ballet the ‘art of nudity,’ this art form has a great history and carries a lot of artistic value. In the afternoons, they would rehearse at the Opera, and in the evenings a few dancers would go to dance in front of the ministry.”

For several seasons that followed, Zorba kept returning to the Cairo Opera stage. Equally it was planned to be performed this year, had not the general shutdown of all social activities put in place on 9 March, in response to the coronavirus pandemic, changed its fate.

In an interview conducted with Erminia Kamel in early May, she revealed that, “We were in the middle of final rehearsals for Zorba ballet … The soloists were ready and the corps de ballet almost ready. It was 9 March, I remember, as we were working on ‘affilage’ (fine tuning) in the Cairo Opera’s main rehearsal room, when we heard that all cultural activities were put on hold.”

Kamel continued saying that all the dancers were very excited about staging Zorba again, with the company setting a new cast and also preparing for their first big tour in Oman.

“We were supposed to stage a few evenings at the Cairo Opera House and then head to the Royal Opera House in Muscat. It was a big thing as we were not just participating in a larger event; we were the event itself. It was the first time for the company with over 50 dancers to be invited to stage evenings of Zorba and El-Leila El-Kebira in Oman, in a series of performances. We spent one year preparing for this tour.” Undeniably, Zorba has engraved itself as one of the most important works staged by the Cairo Opera Ballet Company.

With coronavirus precautionary measures including a general cultural shutdown of all activities, for many audience members, the ballet’s release online is among the highlights of the Ministry of Culture’s YouTube uploads.

The release of Zorba online is part of the Ministry of Culture’s “Culture Between Your Hands” initiative, which aims to bring theatre performances, concerts and other cultural events to audiences in their homes.

Launched in late March, the YouTube channel was filled with dozens of concerts featuring well known Egyptian and Arab singers, theatre plays, and seminars among other content.

According to the data provided by the ministry at the end of May, the ministry’s channel saw 25 million visitors in two months. Viewers come from over 28 countries, including Egypt, Saudi Arabia, Kuwait, the UAE, the US, Canada, Iraq, Germany, England, Morocco and Jordan.

Watch Zorba by the Cairo Opera Ballet Company, staged at the Main Hall of the Cairo Opera House below, or follow this link to view it on the Ministry of Culture’s YouTube channel.