Titled ‘After the Sun Goes Down,’ the over three-minute-long composition is independent from Siam’s work with Massar Egbari and is in collaboration with videographer Adham El-Amir.

The video to the track is Siam’s live performance on guitar. As he explains to Ahram Online, the video format has always fascinated him, but he has not yet fully explored it.

“Videos of guitarists’ live performances have this unique charm, and I’ve always followed such productions by many international musicians. I always wanted to try it, making sure it is done in a professional way,” Siam reveals to Ahram Online. 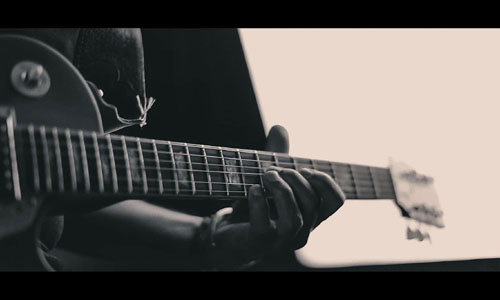 “Adham is one of Massar Egbari’s loyal fans. He called me around four months ago and suggested that he come to the studio and film me as I play.”

A self-described typical introvert, Siam enjoys spending long hours on his own while exploring the many levels of music.

The composition is called After the Sun Goes Down, as it reflects a time when the day is ending and people are going home.

“With the curfew that was in place for three months, I would spend time in the studio from dusk till dawn. It was an opportunity for me to focus on work,” he reveals, adding that the experience has allowed him to revisit some of the older musical ideas he had put on a shelf.

“After a few talks, Adham and I met only three weeks ago. At first, I was thinking about using one of my older compositions. When we met for the first brainstorming session, I realised that the composition did not really fit the mood or the storyboard that Adham had created. I ended up composing something new, completely from scratch,” Siam said, adding that the creation of a new composition made the whole project even more interesting to him.

After the Sun Goes Down is the first collaboration between Siam and El-Amir.

“We will definitely continue. There are already other ideas we have in mind and have already started moving forward with them. Who knows, maybe we will end up doing the whole album together, or a mini album… All options are possible. Let us first see the audience’s reactions to this video.”

And indeed, with the connections Siam built over the years with Massar Egbari, the doors to many new creative endeavours might open up. 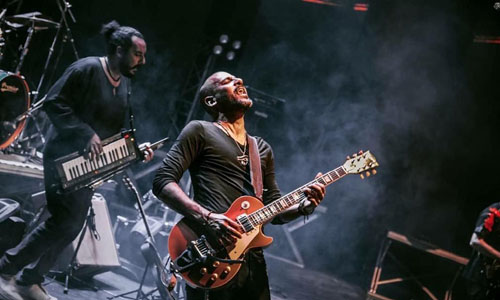 In parallel with Massar Egbari, Siam does some occasional side projects. The last work he did was a guitar track for ‘Bi 100 Wesh’ (Many-Faced/Of a Hundred Faces, 2020) television series, whose score was composed by Tamer Karawan.

“At times, I also cooperate with other musicians and projects, providing guitar lines.”

While today Siam is dedicated full time to Massar Egbari, which he joined in 2008 (three years after the band was formed), and has to allocate his time wisely, he remains open to new collaborations.

“Two years ago, I stopped teaching at the Music Education Faculty at Helwan University, Cairo,” he says, referring to the faculty from which he obtained his Master’s degree, having first graduated from the Faculty of Specific Education.

As he goes down memory lane, he recalls years before Massar Egbari. Between 2001 and 2007 Siam worked with Hob w Salam (Love and Peace), one of the well-known Egyptian bands through which many musicians across generations shaped their future careers. There were also other musical exploration as Siam joined numerous bands, probed jazz, or cooperated with Dina El Wedidi and Maryam Saleh in El Ors (The Wedding) and other tracks and performances. 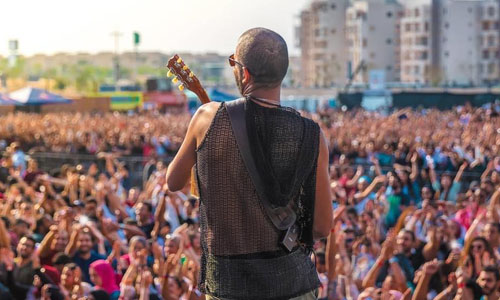 “I come from a home that always embraced music. My older sister has a music education as well; she plays piano. I’ve played guitar since I was eight years old. I can’t imagine doing anything else,” he reveals.

Years of education and persistence in a music career have definitely paid off. With his new track released, Siam hopes to expand on this new independent project.

“I composed several pieces. Some are posted on SoundCloud, others are still on my computer… After the Sun Goes Down, however, is the first piece that took this unique form, with audio and video,” he said, adding that he looks forward to the possible beginning of a new creative direction in parallel with Masar Egbari.

“I am happy about the release of After the Sun Goes Down, and I hope the listeners will like it. And even though this track is somehow a result of the lockdown we were in, I also miss performing. Being on the stage with the band and performing to the audience, who sings along and cheers, is a feeling that nothing else can beat,” he concludes. 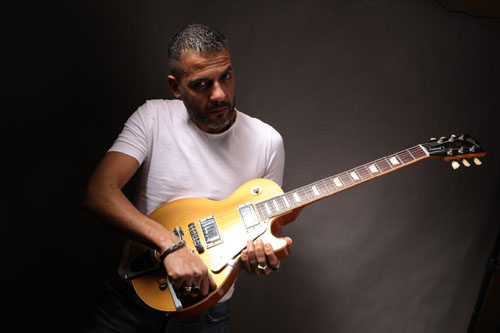