On Friday 26 February, a newly formed trio will take the stage of Room Arts Space in Cairo’s Garden City.

Brainchild of the Egyptian-Canadian guitarist and oud player Ali Omar El-Farouk, the trio is one of his many musical projects in which he explores a variety of music genres, bringing them together to one melting pot that attracts the listeners of all cultures.

With many concerts and musical collaborations in Egypt and Canada (as well as internationally) filling his over 20 year-long biography, the new formation is just a beginning of many creative possibilities that El-Farouk is thinking about.

“I always perform with a variety of formations, and the trio is among those closest to my heart,” El-Farouk reveals to Ahram Online. 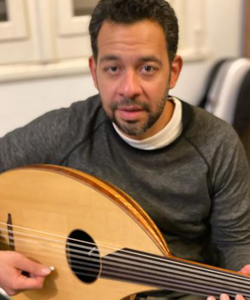 “The character of a trio has this unique sound, whereas melody is accompanied by one or two instruments. I have known Hany for many years, and we have cooperated together in other projects. Then I got to know Hazem… We found ourselves musically and we hope to build something unique together,” he comments.

He then recalled the 13 years he spent in Canada, between 2006 and 2019, in which he launched, performed, and recorded with many bands.

His first album titled ‘Ela Mataa?’ was recorded in Montreal and released in January 2019. He graduated with a degree in Jazz Performance from McGill University’s Schulich School of Music, one of Canada’s top music institutes, and a bachelor’s degree with Distinction in Jazz Studies from Concordia University in Montreal.

His performances include the Festival Du Monde Arabe, Festival Nuits D’Afrique, Montréal/Nouvelles Musiques Festival, and Festival Sefarad in Montreal, as well as the Cairo Jazz Festival, and the Jazz Mania Festival in Cairo.

From jazz groups and rock, blues, and pop bands to Middle Eastern, classical, and flamenco ensembles, El-Farouk looks at music from a very broad spectrum while incorporating his original compositions, which are filled with influences that crossed his life and spoke to his soul.

From classical music to oriental flavourings, El-Farouk’s compositions are equally influenced by tango and flamenco, with the latter one being among his biggest passions.

“I oscillate between classical guitar, Arabic heritage, and definitely flamenco music, besides other genres. In the upcoming concert, the audience will be able to discover the compositions we perform,” El-Farouk says, while the Facebook event adds that the listeners will be taken on “a beautiful journey that will leave you feeling joyful, excited, relaxed, dreaming, and wanting more!” 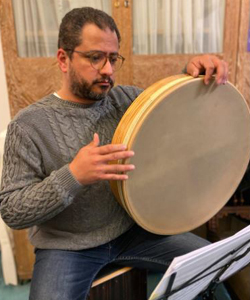 Though flamenco has always attracted El-Farouk, he reveals that he began exploring it deeper when he was living in Montreal, where the flamenco scene is very present.

“In Canada, I also joined many bands playing flamenco. There is a lot in common between flamenco, whole Andalusian music, and Arabic music heritage, something that makes the former even more fascinating,” he adds pointing to the mentioned genres’ unlimited possibilities “and wonderful dialogues that can be formed between guitar and oud.”

In his more recent compositions and concerts, El-Farouk relies on acoustic set-up, slowly moving away from electronic instruments and amplifiers.

“I prefer music based on acoustic instruments, classical guitar, flamenco guitar, etc. The repertoire of the new trio relies very much on this acoustic journey.”

In Room, El-Farouk will be joined by flamenco guitarist and composer Hazem Abd El-Nasser, who throughout his career joined many duet projects with guitar, oud, cello, flute, violin, and voice, including a duet musical project called Dos Cuerdas.

The upcoming concert is among the unique and interesting musical offerings happening in the days of the pandemic.

“We are all going through difficult times, but we can stand as one next to the other. Still, the pandemic situation seems more difficult outside Egypt. In all cases, music always adds beautiful notions to our realities,” El-Farouk concludes.

The concert will take place on Friday 26 February. The doors open at 8.30pm. Taking all precautionary measures, Room has announced that seats are limited and that social distancing is being enforced.